The history of the PUELLAE ORANTES Choir 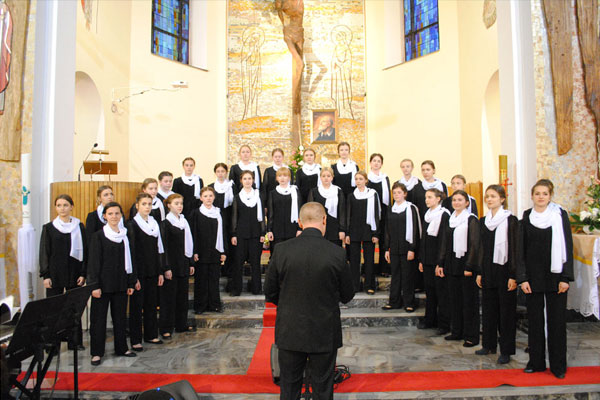 The Cathedral Girls’ Choir ‘Puellae Orantes’ has been performing at the Cathedral Basilica in Tarnow since 1985. The founder and the conductor of the choir is Rev. Władysław Pachota. Aleksandra Topor, who also performs solo soprano parts ,is responsible for voice forming. Members of the choir are girls aged 10-19 from Tarnow and several surrounding towns. Choir’s high artistic level is the effect of many years’ painstaking artistic and pedagogical education.

The "Puellae Orantes" is a laureate of 23 choir competitions. He has competed for the Grand Prix three times:52 Concorso Polifonico Internazionale Guido d’Arezzo (Arezzo - Italy, 2004 r.), 21 International May Choir Competition Prof. Georgi Dimitrov (Warna - Bulgaria, 2011 r.), Concorso Internazionale Corale Città di Rimini (Rimini -Italy 2013 r.), where the choir won the main prize and the medal of the President of the Republic of Italy. The "Puellae Orantes" choir won two categories (sacred music and youth choirs), reaching respectively 97.6 and 98 points of 100 possible and the main prize of the competition - Grand Prix. Rev. Władysław Pachota received the award for The Best Conductor. As a laureate of the Grand Prix, the Tarnów choir was awarded with the medal of the President of the Republic of Italy. In addition, the "Puellae Orantes" choir received additional prizes from the Polish Embassy and the Serbian Embassy.

The choir conducts extensive concert activities. It travelled thousand kilometres giving concerts in Netherlands, Belgium, Italy, Austria, Germany, France. It also performed in the United States, Slovakia, Hungary, Denmark and Bulgaria. It represented Poland at prestigious events organized at home and abroad. The choir is the only Polish singing team which was invited to participate in The International Festival of Choir Winners in Vaison La Romaine, in France.

“Puellae Orantes” co-operates with outstanding composers: Paweł Łukaszewski, Michał Lorenc, Miłosz Bembinow, Marcin Łukaszewski, Paweł Sydor, Jacek Sykulski, Marcel Chyżyński, Łukasz Farcinkiewicz and Louie Madrid Calleja. This co-operation resulted in many arrangements and works that were composed especially for the choir. The late Marian Sawa also composed for the choir. In the year 2007 the piece “Magnificat” composed for the Tarnow team by Marian Sawa was performed by joint choirs at the international oratorio festival Musique en Morvan, in France. It should be stressed that for the first time during the 32 years’ history of the artistic competition of this festival, one of the main compositions presented at it was a piece of music composed by a Polish composer.

The choir released nine CDs and one DVD. Three of them were nominated for the most important award of the Polish phonographic market - FRYDERYK, and one of them received this award. Choir records are very popular, as evidenced by the distinctions of the Gold Record Awards and Platinum DVD Award - the only such distinction in Poland, awarded in the category of classical music. The choir works also enjoy excellent reviews, including one of BBC Music Magazine. The repertoire of six albums are pieces entirely or partly composed and arranged especially for "Puellae Orantes".

The Tarnow choir performs exceptional artistic projects inviting outstanding performers to cooperate, including: the Tychy City Chamber Orchestra "Aukso", the Polish Radio Chamber Orchestra "Amadeus", the Vienna Soloists Orchestra, with which the choir recorded the "Strauss Route" in 2014 - a unique publication containing the works of the Strauss dynasty in vocal and instrumental arrangements. In 2015, the choir performed concerts with a two-time winner of the Grammy Award - the band "The King's Singers", which for the first time performed in Poland on stage with another band.

The band in Tarnów made recordings for Polish Television and Polish Radio, as well as for the French television France 2 and France 3 and also for Vatican, Dutch and French radios.

Records of the Puellae Orantes choir